During the typical one- to two-year absorption period, developers of new apartments always have a large number of vacant units for a time. Technology-based companies and astute former developers have now raised venture capital to form companies that create and operate pop-up hotels that monetize blocks of new, fully equipped, unleased units, thereby reducing leasing risk for developers and their lenders.

Pop-up hotels represent a new hotel category. They offer complete studio and one- to three-bedroom units that include kitchens with full-size appliances, and bathrooms with washers and dryers. The properties usually include a fitness center and, often, an indoor pool. Located in luxury apartment complexes, these pop-ups include security systems and are price competitive with higher-end hotels. Although like boutique hotels in that each of their properties is different, the new companies operating pop-ups form nationally branded networks that undertake both direct online booking and booking through travel websites like Orbitz, Expedia, and Travelocity. The complete apartment units help pop-up hotels broaden the business market to include relocating corporations and the leisure market for families.

Jason Fudin, chief executive officer of Washington, D.C.–based WhyHotel and a former multifamily developer, says developers partner with his firm because “we de-risk their projects with significant found income, early activation of the building/surrounding area, and an added on-site amenity for new residents—e.g., free room nights and cleaning services.”

The WhyHotel concept was created “by developers, for developers,” Fudin says. He piloted the concept in 2016 when he was vice president for strategic initiatives at Vornado Realty Trust, which at the time was developing the 699-unit Bartlett apartments in the Pentagon City area of Arlington County, Virginia. The company obtained approval in 2015 from the Arlington County Board to use 50 one- to three-bedroom apartments as hotel units for up to two years. The hotel units rented for $179 to $329 per night during the first five months of 2016, when the hotel component wound down because the building had reached 85 percent occupancy. Sensing the promise of the concept, Fudin left Vornado to form WhyHotel in 2017 with his partner, WhyHotel president Bao Vuong, then a vice president of development at urban mixed-use developer PN Hoffman of Washington, D.C. 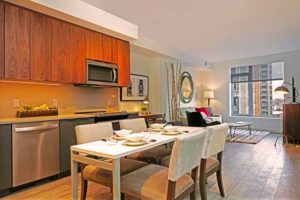 Pop-up hotels, like the WhyHotel unit at Ballston Quarter, offer complete studio and one- to three-bedroom units with kitchens that include full-size refrigerators, ovens, dishwashers, and disposals. (Whyhotel)

WhyHotel operates 160 units on 12 floors of Monument Realty’s 348-unit, 19-story building at 225 North Calvert Street in downtown Baltimore. That 1970s building, a Maryland National Bank office building before redesign, has 445 parking spaces (the blue section) that facilitate joint hotel/apartment uses. (Hord Coplan Macht Architects)
Their purpose was to operate a national network of temporary hotels—with 24/7 on-site service—in 100 to 250 units occupying up to half the space in new downtown apartment projects during absorption, typically eight to 24 months. Securing that number of units in well-located high-end apartment buildings creates enough critical mass to support furnishing and staffing a temporary hotel, which requires at least one exclusive floor to serve as its hospitality headquarters. WhyHotel scales its unit count with the normal leasing pace, gradually winding down its footprint as units are leased to long-term residents, and ultimately exiting altogether once all units are leased. That gradual wind-down gives developers the ability to spread out their lease renewals so they will not need to re-lease large portions of the building all at once.

Pop-up hotels, like the WhyHotel unit at Ballston Quarter, offer complete studio and one- to three-bedroom units with kitchens that include full-size refrigerators, ovens, dishwashers, and disposals. (Whyhotel)

WhyHotel has pursued a clustered strategy in the rapidly urbanizing mixed-use suburban areas of Washington, D.C., such as its 150-unit WhyHotel near the center of the Boro development at the Greensboro Silver Line Metro station in Tysons, Virginia, with a one-acre (0.4 ha) urban space programmed for public events. (Meridian Group/Whyhotel)
The arrangements have benefits for developers and their lenders, but also for long-term renters and the community. For developers, in addition to receiving increased income early in the absorption period, they do not need to invest capital to create the hotel component. They can promote the visibility of their new apartment building in the marketplace, gain a large number of furnished units that can serve as model units for prospective tenants, and increase activity in the building during the leasing period.

Apartment developers gain early master leases and/or revenue sharing of large blocks of units, typically up to 25 to 50 percent of the building’s total. The temporary hoteliers therefore can negotiate favorable lease terms with the developer. The pop-up hotel revenue and occupancy give lenders increased confidence that apartment developers can service their outstanding debt.

Some prospective tenants, particularly those moving to the city, stay in the hotel apartments to help determine if they want to lease there and, if so, which unit size and location they prefer. Existing residents gain access to units they can use for guests, friends, and family without charge or at sharply discounted prices—on a space-available basis for promotional purposes—at their building and others in the network. Cities gain hotel tax revenues and sales tax revenues because the new hotels usually stimulate traffic at nearby restaurants and pubs. Unlike individual short-term rentals by condominium owners or apartment tenants through websites like Airbnb, developers of temporary hotels obtain prior regulatory approval for the blocks of apartment units they will operate. And because the hotels are temporary and the units would otherwise be vacant, cities can rebut arguments that temporary short-term rentals used as hotel units remove housing stock for long-term housing.

Another company in the networked apartment hotel market is Spokane-based Stay Alfred, which started business in 2012 as a vacation rental company. Stay Alfred founder and chief executive officer Jordan Allen, while still serving in the U.S. Army field artillery in 2012, got the idea for a network of apartment vacation rentals in popular downtowns while staying in a new apartment project in downtown Denver near Coors Field to see a Colorado Rockies baseball game. The Spokane native and Portland State University graduate blended his last name with that of his former business partner Conrad Manfred to form Stay Alfred, which has grown to offering more than 2,000 units in 32 U.S. cities.

WhyHotel has pursued a clustered strategy in the rapidly urbanizing mixed-use suburban areas of Washington, D.C., such as its 150-unit WhyHotel near the center of the Boro development at the Greensboro Silver Line Metro station in Tysons, Virginia, with a one-acre (0.4 ha) urban space programmed for public events. (Meridian Group/Whyhotel)

“This flexibility allows us to tailor-fit our lease to the needs of our partners,” he says, whether those needs are cash flow from anchor tenancy, debt repayment, refinance, or resale. Also, partners can experience decreases in marketing expenses, vacancy loss, turnover costs, and management fees, he says.

At Premier Lofts in Denver, Stay Alfred offers 50 apartment hotel units among the 250 in an eight-story building built in 2004 at 2200 Market Street. There it also negotiated a three-year master lease with a two-year renewal option, and an annual 3 percent rent escalation. Pearson says master leases can offer developers a hedge against declining rental rates in a saturated rental market and reduces remarketing costs. Adding a hotel component can enable apartment property owners to reinvigorate and reposition well-located older properties as more contemporary urban mixed-use projects.

Written by Will Macht for Fall Issue of Urban Land Magazine

Apply for the N.E.X.T. Peer-to-Peer Network

Participants will gain connections with other ULI member leaders to enhance their careers.